A Heart for Service

Francis has served the elders in St Luke’s ElderCare (SLEC) for six years since joining in 2012. His philosophy is simple, “ensuring elders leave the centre feeling loved and cared for every day”, a philosophy that also inspires his colleagues.

With this in mind, he lives by this philosophy in his daily interaction and attitude towards elders and his colleagues.

From driver to care staff

Going beyond his call of duty

Francis reading a Mandarin newspaper to an elder

Francis’s love for the elders can be seen through the care he provides, which goes beyond his call of duty. After working hours, he would visit elders who are hospitalised, and go out of his way to help them.

There was a hostile elder with dementia who had the habit of spitting while he was at the centre. The elder would rock his wheelchair to get his way. He became a fan of Francis when Francis started singing his favourite song to him, and waited with him outside the centre for his wife to take him home.  Gradually, the elder became a lot calmer and his hostile behaviour stopped.

His vigilance ensured the elders’ safety

In other scenarios, Francis prevented two elders from losing their way and rendered appropriate help to both their families and the centre.

Elder, Mdm O was admitted for maintenance day care. On two occasions, Francis noticed her asking people for directions to her home during weekends. This alerted Francis to share with the centre manager what he had seen, who in turn, advised the elder’s family members to bring Mdm O for a health checkup. Mdm O was indeed confirmed by a doctor to have dementia soon after.

On another occasion, Mdm K who has mild dementia, was supposed to return home herself by public transport. However, Francis noticed something amiss as Mdm K was not her usual self. When it was time for Mdm K to return home from the centre, Francis followed her quietly to ensure she got onto the right bus. And to his surprise, Mdm K did not know which bus to take. He then alerted the centre manager, who subsequently arranged for transportation to fetch Mdm K to and from the centre.

Francis singing a song to elders during a karaoke session.

The turning point that left a lasting impact on him

There was one incident that left him convinced to “never belittle the things being done at the centre, no matter how small they are”. “Our art and craft activity can mean a lot to our elders because it gives them a great sense of achievement and delight.”

An elder that Francis had helped to care for passed away after suffering a fall. Days before the incident, Francis recalled assisting the elder with his art piece. When Francis attended the wake, he was moved that the same art piece was placed next to the elder’s coffin.

He learned from the family that their father came home one day feeling so happy with his art piece, and constantly talked about his experience. Francis was touched and convinced that the things they do at the centre can impact elders and their families in unimaginable ways. Now, he makes it a point to show elders’ family members what their loved one has accomplished at the centre.

Francis believes in continuous self-improvement so that he can help others. He continuously upgrades his skills and knowledge by attending courses and experimenting with new programme ideas.

He would gladly teach and share his ideas with his colleagues and church friends so that they too can benefit. Sometimes, he would advise friends to install grab-bars to make their homes safer.

Once, he went for training and found a particular game very engaging and suitable for elders. He bought and tested the new game at the centre. When he saw how the elders were engaged with the new game, he took it upon himself to share with his colleagues from other centres, and even offered to purchase and teach them to use the game! 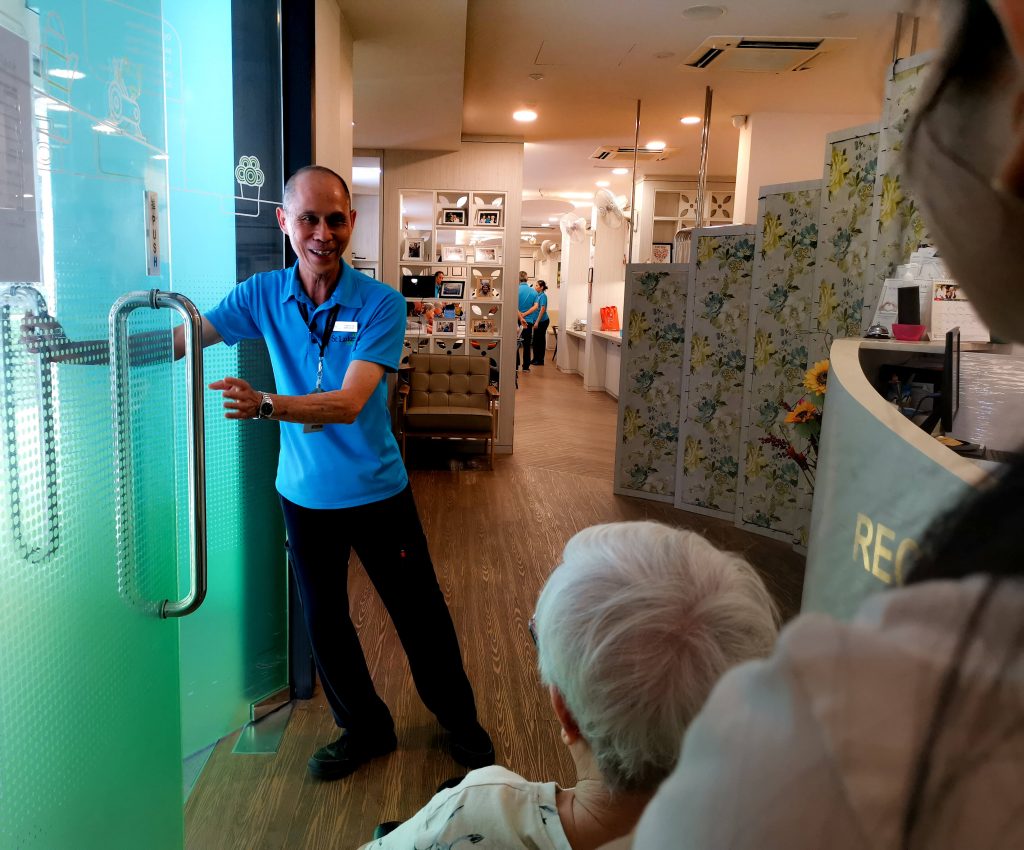 His joy and delight

Francis derives joy and delight in serving the elders from God, who is his source of strength. He believes it is a calling. Whenever he feels discouraged, his daughter and son-in-law, who are healthcare professionals would cheer him on.

Throughout his six years at SLEC, his colleagues have become like family to him and with whom he can share his heart. His delight is in knowing that elders go home from the centre feeling loved and cared for.

When asked how he felt about winning the Healthcare Humanity Award, Francis remained humble and said, “it was a great privilege and honour to receive the award from amongst many nominees!”